Jersey Nights - Trubte to Frankie Valli and The Four Seasons 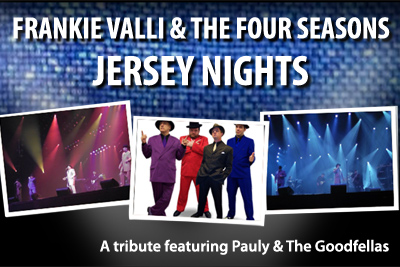 Jersey Nights is an incredible musical tribute to Frakie Valli and The Four Season featuring their many hits and outstanding accapella sound. The show captures the showmanship, energy and music of these great artists and includes eight performers, four vocalists and four talented musicians.

Some of the hit songs included in this show are "Big Girls Don't Cry", "Sherry", "Lion Sleeps Tonight", "Let's Hang On", "Dawn", "Rag Doll", and many more. As an added bonus the show includes songs from the late 50's and early 60's that influenced Frankie Valli's career. The show takes the audience on a musical journey and includes stories about the original performer's musical journey in show business.

This show will have the audience dancing and singing and should not to be missed.