Bette and Barry - A Tribute to Bette Midler and Barry Manilow 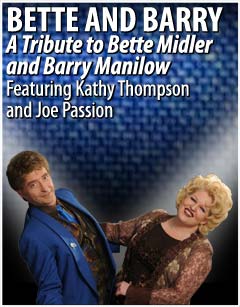 A Tribute to Bette Midler and Barry Manilow two of the most dynamic and entertaining performers of our time. The show features all the famous songs made popular by these artists as well as a number of duets and plenty of humor.

Kathy Thompson portrays Bette Midler and ranks among the best celebrity impersonators in the world. Her physical resemblance is striking as she has the same toothy grin, blonde locks and zaftig build. Her right on target impressions enhance the illusion that you are watching the real Bette on stage. Kathy performs such signature songs as "The Rose", "Wind Beneath my Wings", I'm Beautiful", "Under the Boardwalk", and "Boogie Woogie Bugle Boy".

Joe Passion performs as Barry Manilow and has been a legend impersonator for over 15 years performing all over the world. He is an accomplished musician/pianist and songwriter as well. His version of Manilow is more "Broadway Meets Vegas" with big band arrangements, funny stick and expensive clothes. Joe delivers the fun side of Barry including Barry's great singing and showmanship. Joe performs such Manilow hits as "Can't Smile Without You", "Daybreak ", Mandy", "I Write the Songs" and many more.

Bette and Barry a lively, entertaining show not to be missed.