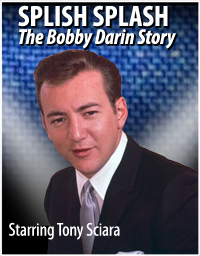 Bobby Darin exploded on the music scene in 1958 with his world-wide hit "Splish Splash", followed quickly by more international hits, such as "Dream Lover", "Mack the Knife", and "Beyond the Sea". Bobby Darin's rise to fame as a performer, actor and songwriter is attributed to his exceptional talent -- but also to his determination to get as much accomplished in a life doctors predicted would be cut short by a heart seriously weakened by multiple bouts of rheumatic fever as a child. And what a life Bobby crammed into 37 years! Sammy Davis Jr. once said that Bobby Darin was "the only person I never want to follow."

In this new show Tony Sciara is the featured performer and tells the story of Darin's life, both his trials and triumphs, in a multi-media format using his compelling narration accompanied by a 12 piece orchestra. Tony has been performing since the age of six and has done it all: theater, television, film and has opened for such acts as the late Donald O'Connor and Al Martino. When Tony turned his attention and talent to his boyhood idol Bobby Darin, he found his passion. Given Tony's great vocal interpretations, h is on-stage charisma and warm relationship with his audiences, "Splish Splash" is a smash hit. He will make you laugh with his Italian sense of humor and help you reminisce with his wonderful story-telling and terrific renditions of Darin classics.

In spite of his short life, many considered Bobby Darin to be one of the greatest performers of all time. He had a stage presence that created an intimate relationship with his audience, through his warm and charismatic personality, his innocent and yet suave style and his impeccable timing and great voice. Tony re-creates that same atmosphere and he will have you swinging with him as he floods the room with electricity and your heart with fond memories. Let Tony entertain you with Bobby Darin's chart-toppers, along with favorites such as "Ace in the Hole", "Some of These Days", "Hello Young Lovers", "Clementine", "That's All", and many, many more. This show has it all including great singing, intriguing stories about Bobby's career, a swinging big band and lots of fun.