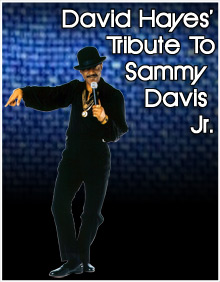 "That was the best singing impersonation of me that I've ever heard."
David Hayes was the subject of this compliment from Sammy Davis Jr. after Sammy saw David perform in Atlantic City.

David has been performing as Sammy Davis Jr. since 1991. He sings like Sammy, tap dances, plays the drums, does impersonations and also looks like Sammy. He sings all of th songs made famous by Sammy, including "Once In A Lifetime", "Old Black Magic", "What Kind Of Fool Am I", "Candy Man", "Birth Of The Blues" and many more. David has performed at Harrahs in Lake Tahoe, The Venetian, Harrahs and Caesars in Las Vegas, as well as major theatres across the US and some of the biggest cruise lines in the world.

He brings to the stage many years of show business experience as an accomplished comedian, emcee, actor, singer, and musician, as well as being an accomplished visual artist. He has earned the title, in Fun & Gaming Magazine, of "Best Performer in a Production Show" four years in a row, followed by "Best Act". David is a unique, multi-talented performer who also regularly appears as Sammy in various Rat Pack tribute shows across the country. He has earned several glowing newspaper reviews performing in this show.

"David not only captures Davis' look but he's got virtually every stage mannerism of the late performer and measures up to Davis' distinctive vocal style."
- Atlantic City Weekly

"David Hayes does a superb job as Sammy in regard to his vocals and some fancy tap-dancing."
- Now That's Entertainment - Parent World

When you watch David Hayes perform you think you are watching the real Sammy Davis Jr. -- without question he is one of the best tribute artists in the world.