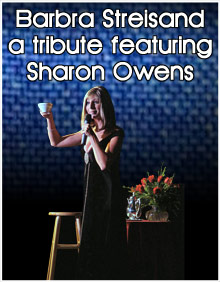 Recently Sharon has turned to television where she was crowned the winner of the hit TV show on Fox called "Performing As", Her national success has created a whirl wind of Barbra fans waiting to see Sharon's famous tribute. Since her TV success, she has been seen on Access Hollywood, Extra, Entertainment Tonight and even paid a visit to the Family Feud.

She has been performing her "Tribute to Barbra Streisand" to critical acclaim nationwide in major showrooms, for corporate events and as a Headliner in Las Vegas. She graced one of the finest stages in Europe, in Berlin, Germany, "Stars in Concert". She also appeared in "Legends in Concert" at the Bally's Hotel and Casino, Atlantic City.

Currently, Sharon has her own show at the Riviera Hotel and Casino in the Le Bistro Theatre called "Barbra and Frank, The Concert That Never Was". Sharon and Sebastian have traveled Casinos and Performing Arts Theaters around the world including a debut in Hong Kong. One of the highlights of the "Barbra and Frank" show was a performance in the Rainbow Room, New York City! New York City quite a sight from the 66th floor!