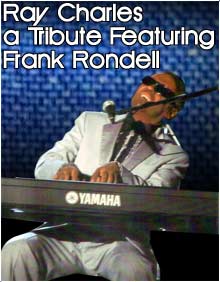 Early in his career Frank was a successful recording artist, charting several hit singles and albums for CBS Canada and Epic records in the United States. A dynamic and versatile entertainer, he is in constant demand and has headlined on cruise ships, appeared at international resorts, casinos and major corporate functions.

Frank's "Ray Charles" is an amazing reproduction both visually and vocally. His past successes have taken him around the globe. As a frequent performer with both "I am a Soul Man" concert and Stars in Concert he has appeared at such high profile venues as the Estrel Hotel in Berlin, Germany and the Gialino Dinner Theatre in Athens. He recently returned from a successful five week engagement at Memories Theatre in Tennessee.

The undertaking of a tribute to Ray Charles was one of the biggest challenges of Frank's career. It has taken five years to evolve and perfect. Ray Charles was one of the greatest entertainers of our time. Frank spent many hours listening to original recordings to capture his unique voice, and viewing video tape to study his physical presence, to bring the true essence of "Ray" to the stage.