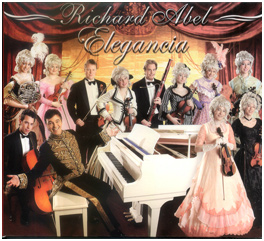 Pianist Extraordinaire
As a child Richard Abel listened to his mother play the piano and at eight years of age he started to play on his own by ear. At the age of fourteen he started classical piano lessons and by eighteen he was p laying Chopin, the Boogie Woogie and performed at his first concert. Today his talent and vitality are known the world over. He has performed across Canada as a special guest with The Glenn Miller Band and with Broadway singer Barbara Cook. He has also performed at The Miss China Gala, at concerts in honor of Prince Philip and for political dignitaries in Canada and many other countries.'

Richard is the highest seller of instrumental CD's in Canada, having sold over one million albums to date. He has recorded ten albums and has two platinum records, four gold records and three Felix Awards for instrumental album of the year.

For Richard Abel, music is a balm that heals the soul's wounds. "It's as if I wanted to bring comfort to people with the help of music" he says. This is how he tries to share what is most precious to him with his audience. As instrumental pieces have no language barriers it is his way of reaching out to his audience. He has a natural easygoing way of making contact with the audience when he is perfoming. He considers himself lucky to have this spontaneity. He knows how difficult it is, as an instrumentalist, to stay in intimate contact with the audience when he has to turn to his instrument and play.