A Tribute to the Italian Tenors 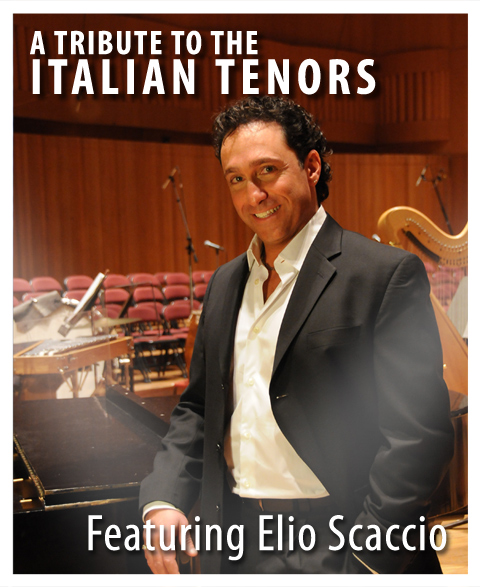 In this wonderful show outstanding tenor Elio Scaccio pays tribute to the great Italian Tenors such as Bocelli, Caruso, Lanza, Pavarotti and many more. He not only sings their classic hits but performs contemporary songs made famous by these illustrious artists. In addition to his tenor repertoire, Elio also performs songs made famous by some of the great Italian American Crooners such as Frank Sinatra, Al Martino, Dean Martin, Tony Bennett, and Jerry Vale.

A performing artist since early chidhood, Elio has been singing virtually his entire life. In 2008 after many years of singing jazz and pop genres he decided to go back to his family roots and began singing classically using his many years of classical vocal training. Having had huge success with his breakout CD, Lettre D'Amore, Elio is on the rise with his upcoming release of his second CD, Somewhere. With his captivating, silky voice, ringing high notes, warm inviting tone and unmistakable stage presence he has gained tremendous notoriety.

Over the past several years Elio has also been part of two super groups, The Sicilian Tenors, a trio with a show that combines the power of The Three Tenors with the lighthearted comedy of the Rat Pack and Vetro, a power duo, that brings together opera and pop music in new modern format.

Here is what the critics say about Elio:

"In the tradition of great Italian tenors, listening to Elio Scaccio trasnports you to a warmer, more love making, sun filled place where emotions take command. Beautiful, romantic, plaintive and thrilling at the same time, Elio's music travels in an instant from your ear to your heart." Dennis Koch - Channel 13 News Baltimore, Maryland

"I've heard and worked with many of the great singers and Elio touches my soul just as much as Tony Bennett and pavarotti." Frank Vignola - World famous Guitarist